Gallery from Event in Lubartów :) 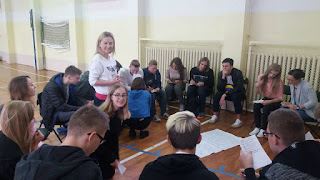 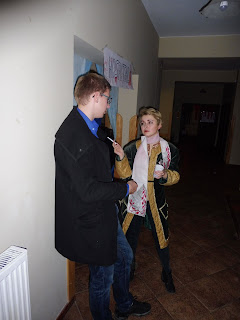 Eng All the things in LARP took place in 20 years after the great catastrophe where a lot of people died. In connection in it we had two worlds - upstairs, where the healthy people lived and which was called Bona-Sona, and downstairs, where all the ill people lived. Upstairs there were park and cemetery, hospital, police station and club. In the club there was music all the time - people there were relaxing, had a possibility to eat something, make a tattoo or visit a rock concert. Later the club became the central point of everything in LARP. It was always loud in thepolice station, because a lot of people were brought to jail. The police officers were protecting the stairs, where people from downstairs werd trying to go upstairs. All the people were coming to a hospital, where the most famous doctor of the city worked, to have their pills every 20 minutes. In the free time all the people could go to the park, but there were a lot of fights and quarells between police and citizens
Publikowanie komentarza
Czytaj więcej

LARP Live action role play Do you want to play today? So you should prepare locations Don’t forget your expectations. Bona-Sona, Underground Our world was turned around Should we find the way to live And we trusted and believed. Kind and Evil, Up and Down Healthy baby must be found Everyone should play his role And, moreover, reach his goal Choose your side, show what`s inside Whom to be you should decide You must fight to live this life Do your best to just survive.
Publikowanie komentarza
Czytaj więcej